You Are Here Home » STARTING OVER MIDLIFE » This Old House: a Year of Projects 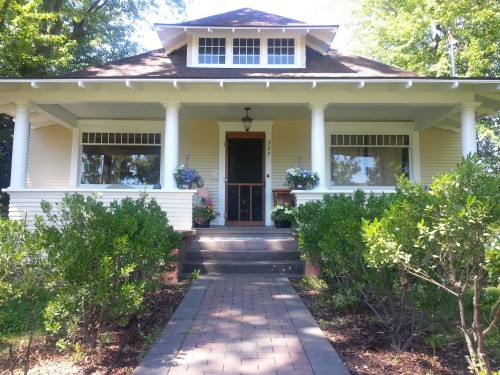 June 1st marked an anniversary of sorts. It’s the date I moved into my “new” house, one year ago. As the date approached, I tried to think of what I’d accomplished in the last year. And to be honest, I couldn’t come up with much. Though the projects seemed never-ending, I couldn’t point at a single project that seemed worthy of noting.

If I had unlimited funds, I would have done things differently. I would have taken care of those ever-leaning giant trees. I would have put in an all new kitchen and revamped the bathroom. I’d have fully fence the yard. There’s so much I want to do. Time passes quickly. I can’t believe I’ve been here a whole year. But do I have anything to show for it? I decided to do a walk-through of my home – to force myself to really think about what I’ve done in the last year. I included home maintenance projects as well as home improvements. I included things that took a long thing to complete, and things that took only a matter of minutes. As I added things to the list, one project at a time, I gained confidence. Yes, I had completed a lot, though most projects weren’t visible at all. 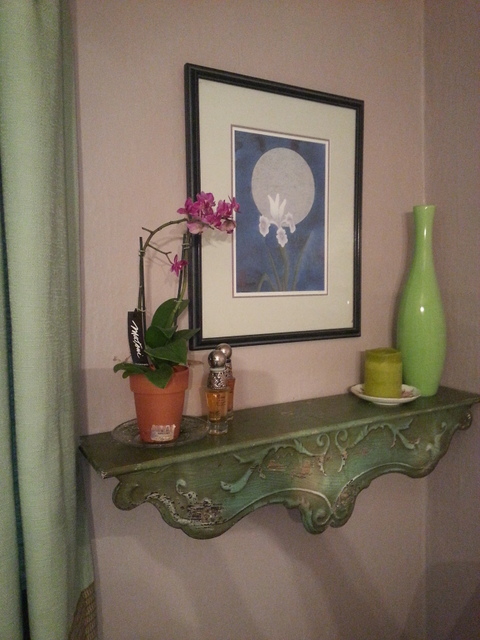 Projects that are visible are the most rewarding. They’re the things that you can actually take someone to and say, “See what I did!” Each one had it’s own challenges.

I swear this house just waited for me to move in and then immediately fell apart.

I was asleep one night when I heard a loud noise and saw a burst of light. No, it was not Jesus who had burst into my room. I sat up, flipped on the lamp, and discovered the curtain, rod and all, had fallen right off the wall. Upon further inspection, I could see that the screws had pulled through the wall on both ends, and on the middle support as well.

I was forced into action. I already had some curtains from my other house, so I decided to install those. I bought a curtain rod and set about getting it done. Simple, right? Well, when you’ve been married for 31-years, you tend to draw lines on what you’ll do and what he will do. Screwing things into walls was one of his jobs. Oh, it’s not like I’d never done it in my life. I just preferred a hammer and nails. And when I did use a screwdriver, it was a hand one – the kind powered by muscle I didn’t have.

But now that I was a single-lady, I figured I needed to know how to use a power screwdriver. Past efforts had ended with stripped screws and I was never quite strong enough to drive the screw into the wall successfully. I told the guy at the hardware store that I needed a power screw driver  and some of those things that look like a little screwdriver to go in it. “Bits?” he asked. Smart ass.  “Yes,” I said, refusing to let on that I really was that stupid.

That night I went to work. I measured and used a level, and marked with pencil. I don’t have central air conditioning and my bedroom was hot. I stood on a stool, sweating profusely. I couldn’t get one damn screw in the wall. They wobbled and turned and turned and wobbled and did nothing. I took a break. I thought. I went back to it – still nothing.

I was determined to put all my weight behind it and make this screw comply!

When that didn’t work, I pre-drilled the holes. It seemed like a lot of extra work. But it worked. I was so proud of myself that I sent a Snapchat of my latest accomplishment to my girlfriends. They cheered me on.

I was laying in bed reading, a few nights later. I heard a familiar crash. Togo followed me into the guest room, where the curtain rod lay on the floor with a wad of curtains. Yep, this house waited for me to move in, and then promptly fell apart.

Here are some of the other visible projects I completed this year: 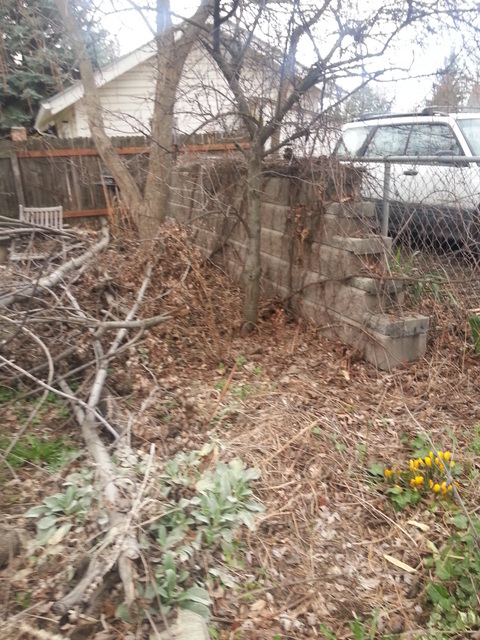 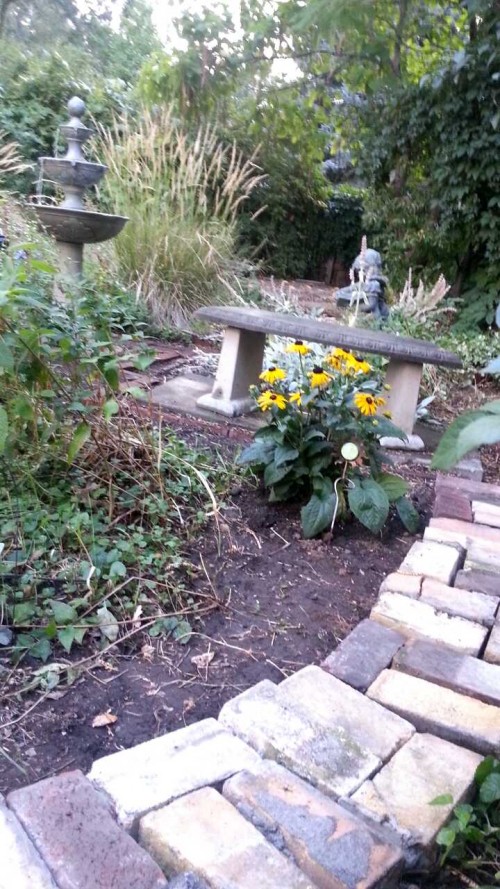 Invisible projects are the ones that unless I pointed them out and told the story, others would never know. They tend to be the projects that aren’t any fun to spend money and time on. One of those projects was a completely unexpected one. I hired a handyman I’d known for years to come do a few days work for me. We stood by the garage, talking about how to put a good lock on it. It was probably built at the same time the house was but hadn’t had much attention. I wasn’t sure yet if I was even going to park my car in the small space. My handyman is a big guy, but still – what happened next should not have happened. As we chatted, he leaned against the corner of the garage and it moved. The garage moved. It leaned against his weight. He stepped back and pushed on it; the garage rocked back and forth.

“Well,” he said. “I can do all those other projects for you. But I really should take care of this.”

So, for the next three days, he rebuilt the inside of my little garage. He brought wood in and put up walls. When he was done, it was sturdy. We both tried to lean on it and it didn’t budge. Am I glad I took care of it? Yes. But it’s not fun to spend money on something nobody else will know was done. Kind of depressing, actually.

Here are some other invisible projects I’ve completed this year:

Leaky bath faucet
Leaky bathroom faucet
Leaky outside faucet
Rebuilt inside of garage
Converted all light switches to 3-prong
Found and fixed pesky banging when washer was running
Had woodstove inspected and cleaned
Learned about oil heat and how to get my tank filled (and what happens when you let it run completely out – not good!)

There were lots of opportunities to learn things about my new house this year. At times I was overwhelmed by it all. One night an alarm went off; why must all of these things happen at night? It was a screetching, horrible, scary sound. I was awoken by it. It’s one of those sounds that has you to your feet and hitting your big toe on something before you even know you’re out of your bed.

But here’s the weird thing – I couldn’t tell where the sound was coming from. I checked all of my smoke detectors – holding each up to my ear. The sound reverberated through the house, bouncing off the walls like a kid in a bouncy castle. I plugged my hears with my fingers as I searched. Then I had an idea. I turned all the lights back off. And there it was – flashing! It was a few inches from the ground – the carbon monoxide detector. I’d had a fire in the fireplace earlier. If you’ve read any of my other posts, you know that my father scared me of everything and anything like this. And yes, he had a horrible story to tell about a whole family who died from carbon monoxide poisoning – which he told over and over when I was a child.

I ran to the doors and opened them wide. Was I dying? Was I dying and didn’t know it? Was I feeling light-headed? The alarm still going off, I stood on the back porch as the chilled air rushed into my house. My windows all painted shut, the doors were the only option. I went back inside and took the alarm off the wall. Then I read the back of the alarm closely. Three quick beeps = leave the house and call 9-1-1. Four quick beeps = replace the batteries. I listened. Yep. Four quick beeps. I needed new batteries.  I took the batteries out and the relief to my eardrums was immediate. But I still wondered if I was dying. What if the detector was wrong in how many beeps it was playing? What if the guy who typed the sticker for the back of the detector typed it wrong and reversed the 3 and 4?

What if being single had made me completely neurotic?

Here are some other learning opportunities I encountered this year:

Learned how to use an anchor hook to hang very heavy objects
Turn on, and set automatic sprinklers (front yard only)
Bought 2 cords of wood (learned I could have gotten a better price if I’d bought it when it’s not cold out yet)
Learned how to operate wood stove (only a couple of scary room-filled smoke moments)
Learned I can move almost anything from car to house, no matter the size
Learned that sometimes you need help – also learned that I hate asking for said-help! 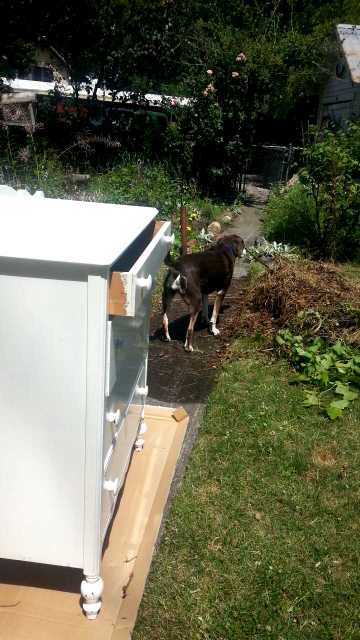 I moved this dresser on a piece of cardboard. Necessity is the mother of invention!

Taking the time to assess the past year has left me hopeful, and even a little proud. At first glance, I didn’t feel like I’d accomplished much at all. But once I really started to look around and to actually make a list, I realized that’s not true. I’ve taken steps this year to make my house more enjoyable. I’ve taken steps to make it safer and more comfortable. And I’ve taken steps to make my home’s systems run more efficiently. All of this equals making my house a home. I’ve heard of people making a two or three year plan for their career goals or their health goals. But what about our homes? Now that I’ve been in my home for a year, I’d like to focus on being more proactive rather than re-active with my projects.

And in the end, it’s all about creating a home to build memories in. And when I look at it that way…Mission Accomplished!

What do you think? Do you make plans for home and yard improvements? How do you decide what projects to prioritize? Please share. Your idea may be the one I choose to implement for my home. Happy Home Making!

Starting Over at Mid-life

« Are You Sitting On Your Gifts?
5 Ways to Curb Chocolate Cravings »