This past weekend, I experienced multiple, critical stages of the human life cycle, all in one day. I headed first to New Jersey for the funeral of my sweet Uncle Ed, who died in his 50s of Huntington’s Disease, leaving behind three children and his wife, my Aunt Peg, and then drove straight from there to the joyful, uproarious wedding of a Jewish woman to a Phillipino man on Staten Island, New York.

To go from knocking back IPAs at an Irish wake, with everyone’s faces and tissues still tear-stained even as they down shots of Jameson, to dancing the hora and listening to a multicultural mix of vows and prayers at a wedding of two buoyantly happy swing dancers, all within 12 hours, was a big emotional shift.

It Begins And Ends With Love

The weekend really was all about family: family coming together to honor the transition of one of its own to the next life, and the launching of a new family.

I am blessed to come from a big, rowdy, Irish family, on my father’s side.

My Dad is the oldest of seven siblings, and his “baby sister” Peg married my Uncle Ed close to 30 years ago. Uncle Ed was a firefighter in Atlantic City, New Jersey fire department for 27 years, before he retired because he was starting to experience symptoms of Huntington’s Disease, which would claim his life just a few years later. 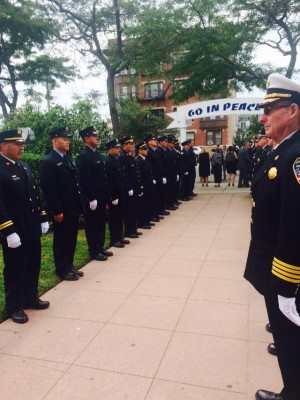 My Uncle Ed’s life was literally dedicated to saving lives, and homes. I’ve been through two house fires in this lifetime, and I understand the importance of a good fire department probably more than most.

The fire department in Troy, New York saved my house when my tenants accidentally set it on fire in 2008, and they were finally able to put out the inferno that resulted from a basement electrical fire in my neighbor’s five-unit building in 2010.

In both cases, parts of the house were gutted, but all the people lived. In my neighbor’s fire, the firemen had to rescue one of the tenants from the third floor.

In the most dramatic moment of the day, after battling a fire with mysterious origins for seven hours, one of the firefighters emerged from my neighbor’s house exhausted, sweaty and smoke-streaked, carrying one of the tenant’s dogs, who had been hiding under a bed on the third floor, where the roof blew off in the fire.

Everyone burst into tears. We thought the dog was lost in the fire, and it was a miracle moment!

I know my uncle must have had many miracle moments like that over a 27-year career. Being a firefighter is one of the bravest career choices I can imagine, one in which you truly get the chance to be a hero and save lives over and over.

Heroes in the Family

Ed Junior, his father’s namesake, become a cop, which is also a heroic career choice. One of his daughters, my cousin Teresa, is a lifeguard on the Atlantic City beaches in the summer time, sometimes making 8 or 9 rescues a day.

It’s a family tradition to save lives apparently. My Uncle Ed was honored at his funeral mass by the Honor Guard, members of the local fire department all lined up to salute the casket as he passed through, carried by pall-bearers including his namesake son, Ed. Jr., my brother Michael and our cousins Will and Sean.

It was a beautiful sight to see these firefighters in uniform, lined up next to a banner that declared, “Go In Peace.”

‘Til Death Do Us Part

My Aunt Peg really lived out her wedding vows, as promised on her wedding day: “in sickness and in health, until death do us part.”

Huntington’s Disease is a very scary condition that slowly robs someone of their ability to function, and which affects both the body and the mind. My uncle’s decline was slow and terrible, and my aunt was there with him every step of the way.

It’s tough to see someone strong lose their strength, and tough to be the caretaker for someone you love. My Aunt Peg had the patience of a saint in dealing with all of the challenges, and was as present as you can be for someone you love, while sacrificing her own sleep and health to a great degree along the way.

Family and love to me really do mean being there for someone, no matter what, and my Aunt Peg really lived out true unconditional love, as did Ed’s children, my cousins Ed, Bridget and Teresa. They helped care for their father, and are heartbroken that he is gone.

It is so hard to lose someone you love, who was such a good father and husband as well. Rest in peace Uncle Ed!

The monseigneur who conducted the Catholic funeral mass said that losing someone so young reminds us to ask ourselves, “How am I doing?” Life is so precious and can be short.

Are we doing all that we intend to do with this one life? Are we living and loving as fully as we can? I have been asking this question since the funeral on Saturday, and evaluating what is working and what isn’t in my life.

I want to be aware of what habits or behaviors I may need to shift in order to create what I want. I’ve been cataloguing what is working well and what isn’t so I can shift and create more of what I most want in life.

The time we have on earth feels short, especially when we lose someone we love, and it’s our job to make the most of it!

Two People Who Are Making The Most of It! 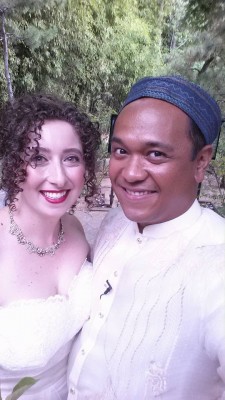 My friends John and Shoshi are two of those who really seem to be making the most of life, and their wedding celebration last weekend demonstrated that. John said afterward that he should create a new hashtag: #HolyShitThisIsMyLife – because reality has so far exceeded his expectation and dreams.

How beautiful it is when love takes us someplace so magical that it is actually better than whatever we have long dreamt about. I am so happy for John and Shoshi, who I’m sure are still floating on the clouds now.

Their wedding ceremony took place at the edge of a decorative pond in a Chinese Park on Staten Island, and was followed by a reception with tons of dancing, open bar and endless delicious food stations. The most magical parts of the wedding were the parts of the ceremony that took Jewish wedding traditions and personalized them to fit Shoshi and John’s personalities.

There was dancing until well past midnight, with both a live swing and jazz band and a swing DJ. The crowd was full of dancers, since that’s how many of us, myself included, met John and Shoshi.

As much as it was challenging to move from the sad energy of a funeral to the joyous energy of a wedding within 12 hours, I was grateful for the chance to remember that all stages of life are important, and what matters most is that we love.

Happiness is really all about embracing all the stages of life, and choosing love at every stage. My friends’ marriage is just the beginning of their joyous journey together.

My uncle’s funeral was the end of his journey with his family on earth, but during the Catholic mass the monseigneur emphasized that we should celebrate the next phase of his journey, into becoming pure spirit and love.

« Swim Workout Challenge: Get Back in the Pool
The Art of Asking For and Giving Advice »