Sometimes we do not appreciate what we have until it is taken away. I am so thankful right now, feeling gratitude and finding happiness in every single breath of clean air, just a week after my family finally escaped to safety after being deeply impacted by the volcanic eruption and ash cloud from Calbuco in Chile. 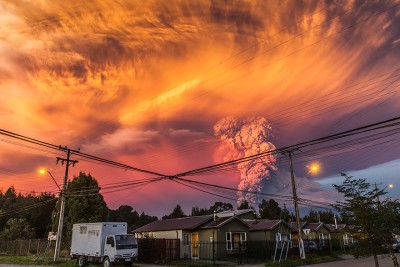 Imagine Waking Up to Darkness

That fateful Thursday morning, my sister Carrie opened her eyes and noticed that the skies were still black. My brother-in-law, Pablo, had gone outside at 1 a.m. the night before and found the skies were raining ash.

400 km away in Chile, the volcano Calbuco, dormant for 42 years, had erupted. The explosion was so powerful that volcano and ash shot 6 km up into the air.

And hundreds of miles away, ash fell like snow, all over the rose bushes of San Martin de Los Andes, where Carrie and Pablo live with their three beautiful children, my six-year-old niece Luna and nephews Nico, 4 and Lucas, three months old.

Carrie said that the visibility level when the ash was falling was like being out in a blinding snowstorm – on a dark and foggy night. You could hold your hand out in front of your face, and not be able to see your hand.

The family had planned to head north to Rosario and Buenos Aires, Argentina, and the trip had to be delayed. Even though all they wanted to do was leave the ash and smoke behind, the roads were closed and there was no visibility for driving.

Carrie and Pablo put damp towels under all the doors in their home to ensure that the ashy air wouldn’t leak in. Still, she said, even trapped inside their home without leaving for a few days, the air quality was not good.

She said you desperately had the feeling of wanting to escape. She was of course worried about her little ones, and anxious to get them back into clean air again.

The kids wanted to play outside but Carrie had to create indoor play activities only for a few days. In the meantime, we all prayed that the roads would clear, the ash cloud would move on, and that Calbuco would become calm and stop erupting.

In the meantime, the whole landscape around them was blanketed in ash. San Martin de Los Andes is full of roses and Carrie said one of the most striking images was seeing all the roses covered in ash. 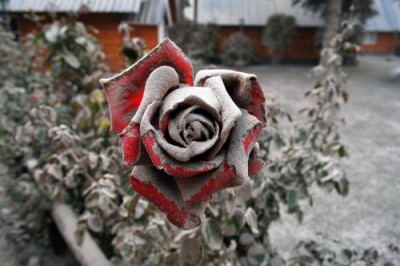 I just kept praying that the air would clear, the roads would open and the kids would be fine. I could not even imagine what my sister was going through!

After the third day, the roads finally opened up. Carrie and Pablo were able to pack the car and take the long drive north to Rosario. Pablo is from Rosario originally, which is about three and a half hours from Buenos Aires.

They own a home there, and Pablo’s mom, dad and stepmom live locally. The grandparents were able to take care of the two older children while Carrie traveled to Buenos Aires with little three-month-old Lucas to get his paperwork taken care of to get his U.S. passport.

This week, the whole family is staying in Rosario, and they are safe. The ordeal didn’t end when they got there, however, as my sweet little angel niece Luna, six years old, was diagnosed with pneumonia. 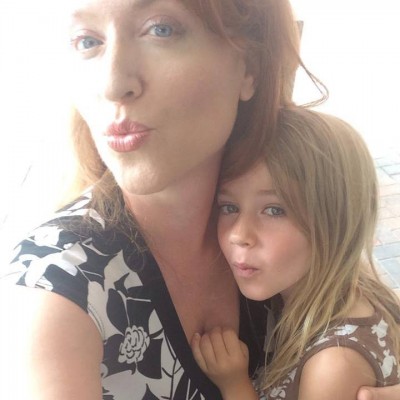 The doctors say that cannot link it directly to the volcanic ash, and Luna had a bad cold before Calbuco erupted. But it was so scary to have my sweet little one be so sick, and so far away.

And I cannot even imagine all the worry, stress and pressure my sister has endured in these past few weeks!

Thankfully, since her diagnosis over a week ago, Luna has been on antibiotics and is feeling much better, playing and enjoying life. I’m so happy that she is healing.

I’m so thankful that the whole family is safe.

And Carrie says she has never before felt so much appreciation for every single breath. When you do not have clean air, you miss it!

We take so much for granted – our health, safety, shelter, food, family, love. May we all be more thankful for all of our blessings, including every single breath.