You Are Here Home » WRITE WITH US » Are We Trapped in Dream Chains? 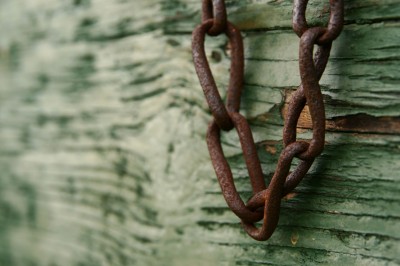 If there’s one thing I’ve learned from writing about my personal finance stuff over the last 18 months, it’s this:

Achieving my dreams is only one part personal responsibility. Another big part of it is culture.

That’s quite a kerfuffle going on this week over Joe Biden’s remark that by unchaining Wall Street, the Republican ticket is showing they just want to put people back in chains. The kerfuffle is all about race. People are arguing about whether the VP was throwing down the race card; or about whether there’d be an uproar from the Democrats if a Republican had uttered such words; or about whether this was something intentionally divisive on Mr. Biden’s part.

Those are all valid discussions to be having. But in all the flap, I don’t see anyone saying anything about a broader issue.

The broader issue is that Wall Street does, indeed, have us in chains.

They’re velvet chains, so we don’t often see how very trapped we are. And they come with a complete set of mental flash cards that continually remind us how good we have it, so it’s worth it to us to stay in chains.

One of those flash cards reads, “Too big to fail.”

Another one reads, “Saving for retirement.”

There’s another one that says “Spending money is your patriotic duty.”

And yet another one: “You have to stay in school because it gets you ready to hold down a job in the real world.”

The thing about flash cards is you’re just supposed to memorize them. Don’t bother thinking about them or asking any questions – that would be a waste of time. These are things that are so fundamental to modern life that you have to just take them as is and make them your own.

If you start questioning the flash cards, you’re less likely to just go with the flow. You’re more likely to notice that you’re kind of stuck, maybe even a little chained.

Did you know that public education as we now know it was essentially invented and structured by titans of industry? That’s because a common, mandatory education system is one of the best ways to teach people a culture, and how to live in that culture. Thus we have all – every one of us – been taught to follow rules, respect schedules, earn our grades, and give the right answers. We’ve been taught to specialize, and to seek credentials. We’ve been taught that money is sacred, earning more is the goal of every sane American, and that if we will just work really, really hard, we will have all the money we could ever need.

At the same time,  we have been molded to become the ideal industrial employee – reliable, manageable, trusting of the greater wisdom of our betters, ambitious for the outward signs of achievement, and convinced that being bored to death is the price we pay for a shot at the brass ring.

Meanwhile, big business is very, very good at keeping us in a consumption cycle. Industrialization has made products affordable. Industrialization depends upon scale, therefore growth – unchained growth, if you will – is not just good, but a necessity. Most people who work for those big companies are doing it for money that barely lifts them above the poverty line – or maybe not even that. That can get to be a problem, because if you’re living on the poverty line you don’t have a lot of disposable income to buy the ocean of stuff being mass-produced.

But wait! Good news. A little thing called credit was invented (by big business)  to solve that particular problem. Enough said about that.

And don’t even get me started on industrial food. Oops, too late.

Everyone has started noticing that there is high fructose corn syrup in virtually all processed foods. There’s also too much salt and fat. You know why we human beings crave processed food once we start in on processed food? Because the combination of fat, salt, and sugar are addictive. They’re addictive like tobacco is addictive. Were you to graphically plot the history of tobacco, you could put that same graphic on top of the evolution of processed food. Even without the graphic, we can predict where it all ends: with people addicted to stuff that is killing them.

Walk into most any grocery store, and what do you find? That the cheapest food is the most highly processed food. The most colorful packages, the best sales, and the most insistent marketing are all focused on the most highly processed food. On an August afternoon, when your neighbor’s backyard garden is overflowing with tomatoes, you can only get a pale pink cottony tomato-shaped thing at the grocery store. And it was picked green in another country and then sprayed with something to turn it red, sort of. But at least it’s marked organic.

This stuff drives me crazy. And it has me in chains. Because sometime, in December, I’m going to want to make spaghetti and meatballs. And my only option will be to buy canned industrial tomatoes, because I didn’t have the time or the money to plant a garden, grow my own tomatoes, and spend days canning them.

I don’t have time because I  have to work two jobs just to make ends meet. I don’t have money because I’m spending $250 a week on gas to get between home and two jobs in two different places. Meanwhile, I’ve lost all the equity in my house but I’m still pouring money into it because that’s where my retirement money is – in the house, my biggest and most successful investment. Except for my 401(k), which I invested in the company store known as the stock market, and which is down 40%.