You Are Here Home » BE A MOTIVATIONAL SPEAKER » Boston Celtics M.L. Carr on Achieving Your Dreams 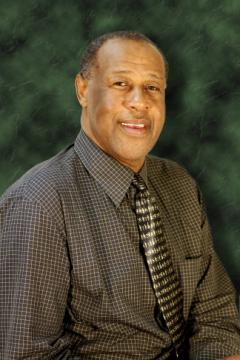 Last Friday, we had a special keynote speaker at a fund-raising gala that I’d organized for the Catholic Schools of Pittsfield, one of my clients. I’d been working with a dedicated committee of volunteers for nine months on this one.

When the 6’6″ former Celtics player walked up to the podium in the elegantly decorated ballroom, looking out over the 30 skirted tables with tall centerpieces of elegant white and violet floral arrangements in illuminated vases, the guests in their suits and cocktail dresses began waving their white napkins in the air and whooping.

He laughed and shook his head. “Now, the kids I spoke to this afternoon were so well-behaved, and here I come to this elegant gala and you are all misbehaving!”

Basketball legend M.L. Carr takes it all in stride. He was known for being the Celtic who enthusiastically waved his white towel in the air to cheer the other players on, back in the day when he helped the Celtics win a few World Championships.

We had raised $100,000, including one final gift that came on the night of the gala, when a family felt inspired enough to write us a $20,000 check on the spot.

Learning From A Champion

M.L. played for the Celtics in the 1980s and was known for a steal and dunk that sealed a championship in 1984. He went on to become a coach and general manager of the Celtics and is now also an author and philanthropist. And, he is a terrific public speaker. He was totally inspiring. More importantly, he was real, genuine, humble, and fun to be around.

M.L. shared a story about visiting New Orleans after he’d won a world championship title with the Celtics. He said he was walking down the street and spotted a crowd gathered around a 7′ man who turned out to be David Robinson – a future pro ball player who was still in the Navy at that point and not a professional athlete yet. People were seeking his autograph.

Finally, one woman noticed him and came running over. “Wait! Wait! I know you!” she said. “Give me a minute, I can’t place it, but I’ll figure it out…” “I know!” she said. “I remembered! You’re the cheerleader for the Celtics!”

I loved that. It was humbling, for sure, he said, and yet perfect. We often set ourselves up to win in life simply by cheering for others, and by being an enthusiastic part of a team. M.L. shared stories about how he came to be a professional ball player in the first place. One of his mentors took an interest in him when he was a teenager, and encouraged him to attend a local private school.

And, he encouraged him to play basketball. M.L. says he was the worst player on the JV squad. He kept at it and made it to the varsity team.

“ is the name of M.L. Carr’s book that he gave out to all 250 gala attendees last Friday night–an autographed copy for everyone. And it summarizes his story won of making it to the pros. In the summer of 1973, M.L. graduated from college and was celebrating having won a national championship with his Guilford College basketball team.

He was soon drafted by both the NBA Kansas City Kings and the Kentucky Colonels of the old American Basketball Association. He chose to sign with the Colonels because he thought his odds of playing would be better with that team.

Yet just three months later, the general manager informed him that he wasn’t good enough to make the team.

He went back to his hotel room and cried all afternoon, and then flew home, not sure what he would say to his family, friends, and fans. On the plane home, he thought about how his father would always face his challenges head-on, without excuses, and he decided to tell everyone that although he might not be good enough, yet, he would not give up.

Back home, he played weekend ball with a minor league team for $110 per game, worked as a car salesman and at a jail during the week, and played pickup games in the evenings. And, he worked tirelessly in the gym, especially on the skills he was told needed improvement–shooting and dribbling.

Another Chance at His Dream 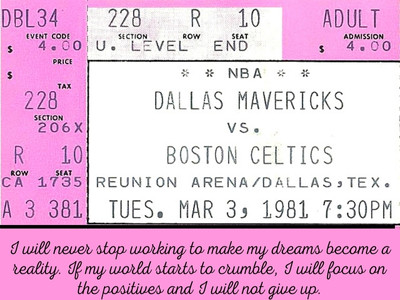 The following season he got a tryout with the Kansas City Kings, but once again was cut from the team. Yet just two days later, he got a call from Red Auerbach of the Celtics, telling him to come to Boston. Red announced that while he didn’t have a place for him on the team just yet, he wanted to “hide” him for a year.

M.L. was sent to play for the Israel Sabras in Tel Aviv, and he made the most of the opportunity, becoming MVP when they won the International Pro League Championship.

Now he was in demand again, he signed with the Spirits of St. Louis of the ABA in 1976, playing one season there, and then moving on to the Detroit Pistons for three seasons. In the summer of 1979, he signed on with the Boston Celtics and went on to be part of two world championship teams in 1981 and 1984.

As he writes in Winning Through Persistence,

“You must be willing to pay the price, develop an unwavering commitment, and not be deterred by what others think or say about you. There will always be doubters, critics, and nay-sayers, but the power lies within you to succeed or fail.”

What I loved most about meeting ML Carr was just talking to him and watching him interact with others. Athletes may have an ego, as he said, but he didn’t display any. He was down-to-earth, kind, engaged completely with everyone he chatted with, and laughed a lot. When he arrived at the gala, we asked if he’d be willing to take photos with all of the gala’s Hall of Fame inductees as they were honored.

“Of course,” he said, “whatever you need.” “I’m here to work!” he said. Yet, it was work that you could tell he loved–meeting fans, connecting with people, giving inspiring remarks.

And he had earned it by being so persistent over the years.

The theme of his talk was aiming high and winning the championship of life. I think we all left that ballroom feeling lifted up by this great athlete and human being, who now focuses much of his time and work on helping youth, giving back philanthropically, and inspiring others.

Here are some beautiful words from M.L. from his autobiography, Don’t Be Denied:

“Everyday I have internal conversations with myself. Somewhere inside, I’m speaking with the generations before me and the grandchildren of my children. I promise something daily to these future generations because we are struggling with real problems. I tell myself that I will stand up for the things I believe in. I will face life’s challenges as they come and rise to the occasion, no matter what the adversity. I will not be deterred by what others say or think about me.

“When negative barriers are put before me, I will find a way to get over, under, through, or around them. I will continue to dream, but I will never stop working to make my dreams become a reality. If my world starts to crumble, I will focus on the positives and I will not give up. With God’s help and the help of others, I can and will fulfill my purpose. I will not be denied.”

I can and will fulfill my purpose. Try repeating this to yourself every day. Remember that we are stronger than we think, braver than we know, and more powerful than we can imagine when we simply reach for the stars and come from love.

« Motivational Picture Quote: Travel Opens us to New Beauty
How to Photograph a Wedding if You Are Not a Wedding Photographer »