Creative Push Back – getting negative feedback for your writing or art

My dream to heal with photography has had some peaks and valleys. So has my much shorter writing career. My last blog created quite a bit of controversy for me. At first I was excited (peak!) then floored (bummer valley), then I realized I needed to blog about what creative push back feels like for an artist and writer. This almost knocked me down. I had no idea how to write another blog. But the amount of feedback that my writing gave people hope has confirmed that I was supposed to write it.

“Oh, that post was exactly what I needed to hear. I’ve been refusing to adopt the belief that divorce is going to be all negative, especially for the kids.” – P.L. (currently in the divorce process)

This is not a crazy or wild idea. It is unconventional. But it is growing.

When I contemplated divorce, the number of articles that proposed staying for the children were numerous. They only advised leaving if the marriage was abusive enough. Usually this meant physical abuse. But there are all kinds of abuse, many are not physical but cause as much damage.

I’ve known several families that stayed for the children with some even telling the children “we’re staying together for you” and living in anger for decades. The kids hated it and grew into adults who hated it.

I wrote this article for those of you who have tried everything to save your marriages. You’ve been to couple’s counseling. You’ve done individual therapy. You’ve spent years of your lives trying to hold something broken together.

If you are at this place: you have nothing to feel guilty about. You have every right to seek happiness and believe that you will find it.

You teach your children more by leaving and seeking harmony with their parent post-split than you do by staying and seething that this person isn’t working with you. Your children will be fine. They will thrive. They will learn all the things I mentioned in my blog and more. This screen shot is of an incredible woman. I admire her professionally and personally for putting her son above all. He is THE MOST INCREDIBLE KID. If my Bub can turn out half as well as her Mini we will have done a great job. 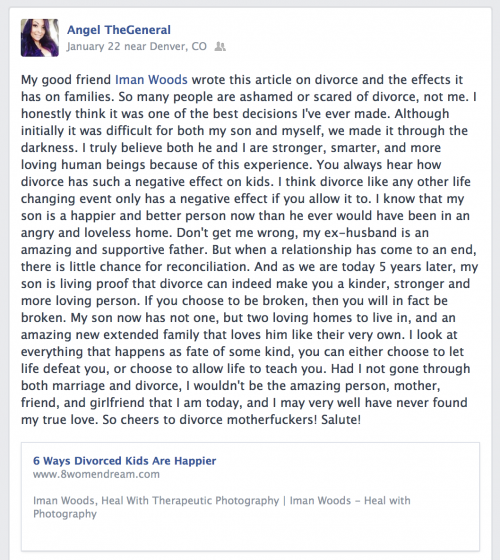 They will gain extra “bonus” parents. And I’d like to note here that every mother that loves her child wants her ex’s new partner to love her child. When my ex finds someone I want her to feel like I do. I want her to want what’s best for my kiddo, laugh at his brilliant humor and comedic timing, notice how caring he is and nurture the things he’s interested in. When and if that happens it will be like I won the lottery. 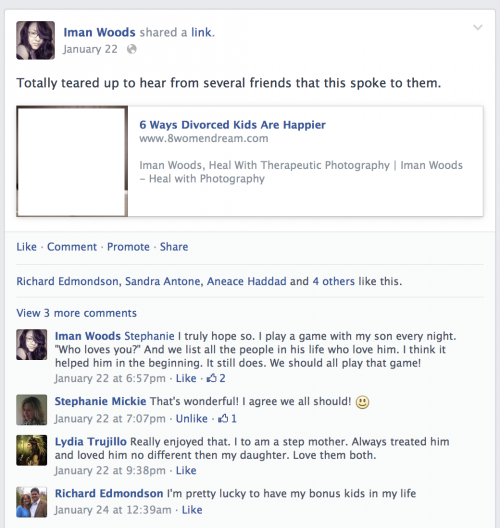 The whole Disney step-mother thing (while real!) is not a given. It doesn’t have to be so unhealthy! It’s not easy to treat your ex with care and respect but it IS an incredible lesson in forgiveness and love for your children to see.

With all that being said, I’d like to talk about what the pushback felt like and how I moved past it.

Awful. Since it happened, I struggled to believe in myself and couldn’t even respond to the incredible comments posted here.

I spent quite a long time researching, writing and editing that article. I ran it by other divorced moms to make sure I was on the right track. After publishing I got private messages, texts and emails that this blog HELPED. It gave people going through divorce permission to try to have a loving family post break down.

But my intentions and title were questioned. Images were asked to be removed. I chose the images carefully, seeking those that my heart happy. I removed them but that doesn’t change how much I love the photographs. It doesn’t change the hope that this blog created for others. Or the discussions it started. 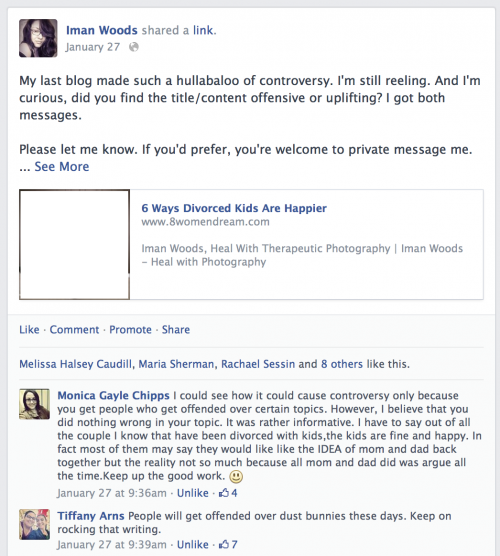 I got some amazing feedback from our fearless leader Cath. She sent an email full of inspirational quotes about people getting the push back and how it’s a sign of creating something wonderful.

“Bring on the controversy. I write real life. It’s harsh and sometimes gritty, but it’s real. Why should we tip toe around that?” ~Shandy Kurth

“For wordsmiths and masters of words, the words have a tendency to shoot straight to the hearts of people, and this either deeply touches them or deeply angers them. Like the apostles in all their loving controversies are those who are masters of words while combining this gift with truth.” ~Jami

(Writer’s note: before I get some creative push back I am in no way comparing myself to an apostle.)

Often times, people who are offended by a writer or artists’s work see something in it that makes them uncomfortable about themselves.

I didn’t write this to judge anyone. I wrote it to be an affirmation that this is possible with the right attitude of all involved. And as I reread it today, I’m still thrilled that I wrote it. It’s trending. Of 1900 blogs listed on StumbleUpon, it ranked as the fifth most read. The average read time for this blog is four and a half minutes. Dude! The average read time for blogs internet-wide is thirty to sixty seconds! The stats are rolling in and showing that there are more people out there who feel like I do. It honestly scared me a bit to read them. Usually I work and put blogs out thinking hardly anyone would read them. So I’m putting that in my mind as more important than the few that disagreed. Creative push back doesn’t have to stop you. It can push you forward. Here I am getting back on the horse. You can too.

« Finding Happiness In The Big Apple
Why They Love You But Don’t Buy From You: Tips To Sell Dream Products »