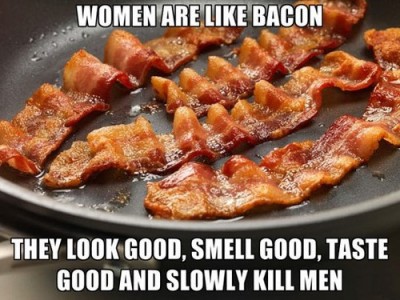 A lot of my friends have what seems to me to be a rather unhealthy obsession with bacon. It’s hard for me to understand it, because I stopped eating meat ten years ago, and recently transitioned from being vegetarian (no meat) to vegan (essentially no meat, dairy or eggs, i.e. no animal-based products).

And then there are all the bacon spin-offs: Maple bacon ice cream. Chocolate chip cookies with bacon in them. Bacon vodka.

Bacon is a thing, it’s a meme and it’s a hipster’s way of showing that you are cool: eat more bacon, on everything.

There are so many bacon memes: “Women are like bacon: They look good, smell good, taste good and slowly kill men.”

I have to disagree with that meme, because I think women are actually good for men, but you cannot actually argue that bacon is good for you. Saturates fat, cancer-causing nitrates and loads of sodium are killers.

So, instead of munching on bacon, I am instead finding happiness through a plant-based diet with benefits beyond my wildest imaginings.

But How Do You Get Enough Protein?

I find it so interesting that no one seems to worry that people who subsist on McDonald’s and bacon double cheeseburgers will not survive and be healthy. But if you tell someone you are vegan, probably about 50% of the time, they will ask you, “But how do you get enough protein?”

Everyone seems very concerned that people who do not eat meat will wither away and die, since the typical American diet is so predominantly meat-based. I think they believe I munch on lettuce all day long.

Nothing could be further from the truth! Actually, I still eat all of my favorite foods, including childhood comfort foods like macaroni and cheese, except I now eat the vegan, plant-based version.

There are vegan hot dogs, veggie burgers, vegan turkey (Tofurkey), vegan sausages. There is vegan (dairy-free) cheese which can be used to make mac and cheese or vegan pizzas.

I still eat the vegan version of: burgers, hot dogs, lasagna, meatballs, tacos, Sloppy Joe’s, pizza, mac & cheese, turkey, sausages, hamburger crumbles and more. I also happen to be gluten-free at the moment, and I eat gluten-free bread, pasta and pizza crust, rather than wheat-based.

Trust me, I am NOT wasting away, I do not go hungry, and in fact I have more energy than just about anyone I know. I do some form of workout just about daily, including the gym, lifting weights, yoga, dancing, and/or hiking and walking.

People know me to be somewhat of an “Energizer Bunny.” There do not seem to be limits to my energy usually and I don’t even always know what to do with all of it!

What Does A Day In The Life of a Vegan Look Like?

I start every day with a vegan, gluten-free protein shake that has 25 grams of protein when I make it with almond milk, and less than 250 calories. As a 5’4″ 130 pound woman, I need about 50 grams of protein a day.

I don’t count calories and I don’t starve myself or diet, but I do count the number of grams of protein I get in a day, and I easily get more than 50 grams of protein, every day, while eating a plant-based diet.

Lunch is usually either a salad and/or soup, maybe with a hummus or vegan turkey sandwich on gluten-free bread, or if I am indulging one of my favorite tempeh Reuben sandwiches (and yes you can make a vegan version of a Reuben sandwich and it’s incredibly delicious!).

I tend to have either some kind of veggie dish like a stir fry or gluten-free pasta with spaghetti sauce and meatballs or a traditional favorite like a veggie burger with all the fixins’ for dinner, along with greens or a salad of some kind. And I eat a little bit of dark vegan chocolate every single day!

How Can You Try A Vegan Diet?

There are so many resources out there to help people learn more about eating a plant-based diet, without any meat-based products. Here is a great list of vegan sources of protein.

I love the Website Happy Herbivore, which has tons of great vegan, low-fat recipes and also offers weekly meal plans that can be purchased for only $1 a day, and that even include grocery lists of what you need to shop for to make this week’s vegan meals!

For those who have not seen it yet, the documentary Forks Over Knives does an amazing job of sharing how “going vegan” has saved countless lives by curing people of heart disease, diabetes, high blood pressure, cancer and more. Most diet-related illnesses are linked to the saturated fats, nitrates, chemicals and more in meat, dairy, fast food and processed foods. 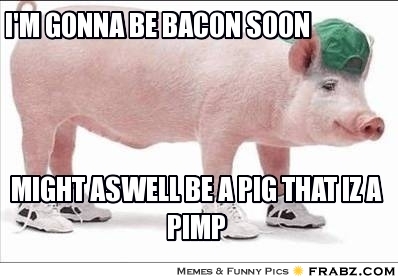 Statistically speaking, research shows that less than one in ten vegans are obese, whereas one in three meat-eaters are obese. Vegans have a lower BMI and much lower incidence of heart disease, stroke, high blood pressure, and diabetes.

Former President Bill Clinton became a vegan to cure his own heart disease. Many celebrities are now proud vegans.

Ellen DeGeneres, Beyoncé and Jay Z, JLo, and Brad Pitt are some of the more well-known vegans who make a point of sharing how much they love this diet and lifestyle.

I have found that it’s infinitely easier to maintain my figure and ideal weight when eating plants than when I used to indulge in meat, dairy, fast food and processed foods. In college, I gained more than 40 pounds, which I lost again. It was all due to eating the “typical American diet, and too much of it.”

These days, I don’t diet. I eat when I’m hungry, and I eat until just before I am full.

I eat a plant-based diet, and find creative recipes and ways to make everything I have always loved. I honestly don’t expend a lot of energy planning meals ahead, either. I am busy and tend to eat on the fly.

But I have learned what staples to keep in the house, which for me include gluten-free bread and pasta, tempeh, tofu, vegan hot dogs and burgers, vegan hamburger crumbles, vegan sausages, vegan cheese, vegan cream cheese, spaghetti sauce, chickpeas, black and other beans, almond milk, almonds to snack on, and of course lots of greens and vegetables and fruits as well.

I feel amazing and have more energy than ever before. I’m 44 years old, but get carded often, mistaken for a college student, asked out by 20-year-olds and told that I look better and younger than ever before.

I’m so happy knowing that I’m taking great care of my health. There are other, more global reasons to go vegan as well.

The United Nations has said that the best way to reverse climate change and to heal the earth would be for everyone to adopt a vegan diet, because the meat and dairy industries are so incredibly damaging to the environment. Beef is the worst offender: we cut down irreplaceable rainforests for cattle to graze, endangering the environment, the earth and some rare species.

Of course there are the animals. Some people do now choose to eat only grass-fed beef from local farmers, and that is an improvement. But the reality is that most of the 3,000 animals who are slaughtered every second for human consumption lived terrible lives full of suffering.

The meat industry in general is not kind to animals. To learn more about this, read the book that originally made me a vegetarian 10 years ago: Fast Food Nation by Eric Schlosser.

Best Decision I Ever Made!

As I see it, there is no downside to eating vegan! I STILL eat all of my favorite foods, but I just eat the plant-based version versus the meat-based version.

I am healthy, fit and feel amazing and full of energy. My skin is clear, and my outlook on life has never been more positive.

My conscience is clear, because I can say with every meal that I eat that “no animals were harmed in the making of this meal.” I used to be someone who thought I “could never be vegan” because of cheese, but I’ve gotten used to not eating cheese as well (I do eat vegan cheese, but I can live just fine without eating dairy regularly and I don’t honestly really miss it).

To being a sexy, happy vegan! It’s one of the main ways I find happiness, energy, health and joy these days.