A long time ago as a successful chef in New Orleans, Louisiana, I went to jail.

I was driving slowly through a park during the New Orleans Jazz and Heritage Festival. This particular year I wasn’t attending.  I  noticed a police car pull up behind me and turn on their lights. I immediately pulled my car over.

There were 2 cops: a man and a woman.

The male officer asked for the usual stuff that cops ask for at a routine traffic stop.

I cooperated with him until it became ridiculous. He asked, “Why were you going so slow?” I said, “Because I’m delivering quite a bit of food to a client and I need to be careful.”

He didn’t believe me.

I got out of the car, popped open the trunk and pulled back the foil on 6 huge pans of stuffed eggplants. Their mouths dropped. I said, “Now do you believe me?“

He didn’t like my attitude. He was one of those cops with a chip on his shoulder.

I also didn’t like his attitude.  At that point in my life, every day life in New Orleans was a chore and my tolerance level for other people’s anger was very low.

He yelled at me to go sit in my car.

Both officers then walked up to my car and the male officer said, “Get out of the car!”

He then proceeded to inform me that, “You’re under arrest!”

Apparently, I had a moving violation. Not unpaid, but “unfixed.” In New Orleans it was once easy to get  your tickets “fixed” rather than paying them.  You just had to hang out with the right people and they would “take care of it” for you.

I knew the right people, but someone had obviously dropped the ball.

In the beginning when I first moved to California, one of the questions that I often asked co-workers was, “Where do you go when you need a ticket ‘fixed’?” I’ve never seen so many confused faces in my life.

Obviously, no tickets get ‘fixed’ in California.

I tried talking my way out of my first arrest. I began to spout names of friends and clients who were high on the totem pole of New Orleans politics. The cop wouldn’t budge. I asked him to let me slide because my client was waiting for the food I was delivering. He became even more angry with me. The policewoman was sweet and asked me to go sit in my car. She was going to talk with him to see if she could convince him to let me go. I thanked her and went to sit in my car.

They walked back up to my car and the male officer told me to get out of the car AGAIN.

He then arrested me.

I looked at the policewoman and she mouthed, “I tried.”

I said to the policeman:

I am going to ask you 2 questions:

1.Would you wait until I get an employee here to deliver this food,

2. Is there anything I can say that will prevent me from getting arrested?

I said,  “OK. Thank you. but let me tell you one damned thing — you mean to tell me that you are worried about me with a stupid moving violation when 5 blocks from here there are people drunk as skunks with bags of weed in their pockets getting in their cars to drive home?”

He had confirmed that I was going to jail regardless of what I did so I felt the need to speak my mind.   I thought maybe it would make him realize how absurd this situation had become.   Silly me.

My employee showed up, got in to my car just as I got in to the back of the police car.

I then called a good friend from the back of the police car who was well-connected in the New Orleans, Louisiana government. 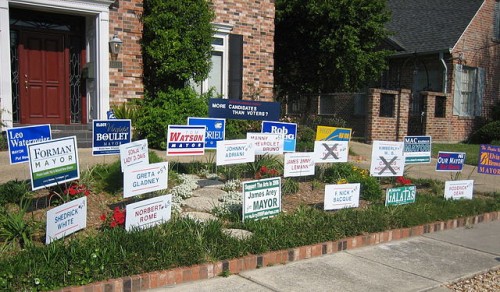 I replied, “Oh, sitting in the back of a police car on my way to jail. Do me a favor and call a judge right now to get me out. I will be at the jail in about 20 minutes.”

When I walked into the building that housed the jail, I was stunned. There were many scary-looking guys, some women, and a lot of  angry guards being verbally abusive. I went to what they call a “holding cell.”

If you are Catholic: It’s like purgatory before hell.

There were nothing but women in the holding cell and let me tell you — it was pretty scary. There were benches attached to the walls, a toilet with no walls around it, and a phone on the wall. It looked like a pay-phone, but you couldn’t pay money. Any call you made had to be collect.

I sat on the bench and buried my face in my hands.

I listened while the women in my cell talked about what guard they were going to “take care of” to score crack and where they were picked up for prostitution.

I thought, “Mother of God, is this really happening to me?”

The cell door suddenly swings open and an Asian woman is shoved in to the cell. She was dressed well and I could tell she was just like me — a victim of some odd circumstance that got her arrested. Who knows, maybe it was the same male cop.  She looked terrified. She didn’t speak English. All she could say was, “Lawyer.”

A few of the women laughed at her while others tried to help. I pointed to her “rap sheet” and she handed it to me. I saw that she was arrested for a DUI. She obviously had enough smarts to know that she very quickly needed an attorney.

I thought, “How can I help this woman who I can’t communicate with?”

I picked up the receiver to the phone and I called one of my best friends.

On her caller I.D. it read, “Central Lockup of New Orleans.”

I’m sure she figured it was a wrong number … or maybe … me.

She answered the phone and I said, “Give me the name and phone number of a good lawyer who can help someone with a DUI who doesn’t speak English. She’s Asian.”

My friend had worked for good lawyers in New Orleans and knew who to recommend. She gave me a phone number and asked what the hell I was doing in jail. I told her I’d explain it all later. Suddenly I realized there was not a pen to write down the number.

I said the phone number over and over aloud as I kept looking around the cell at each of the crackheads and prostitutes for a clue as to how I would write a phone number without a pen.  My eyes stopped at one woman and I said,  “I need to borrow your earring.”

She glared at me.

For some reason I didn’t feel scared. I said, “Come on, help me out here!”

She took her earring out and handed it to me. The cell fell silent.  I sat on the bench and got busy with an earring and the Asian woman’s rap sheet.  When I was finished, I walked to the middle of the cell and held the rap sheet to the light.  The phone number was perfectly visible in little punched out holes.  I handed the piece of paper to the Asian women and I heard one of my cellmates say,

It’s easy to face fear when you are doing something you are passionate about, like helping someone who desperately needs it.  As you travel down the dreamer’s journey, helping others can help you forget the situation that you find yourself in and move you beyond where your fears are holding you prisoner.

And on the flip-side  you also can’t be afraid to ask for help — no matter what situation you find yourself in.

Improvise when you find that you’ve hit a brick wall. As a chef, improvisation is 2nd nature and it’s a big help in creating something new and wonderful.

If your dream plan A doesn’t work — don’t give up.  You have to pick yourself up, face your fears, improvise a little, and make things happen.

Just like I can’t let the slow time of year in the culinary business stop me from pursuing my dreams.   I’ve been improvising and recreating things like crazy — pushing myself outside my comfort zone to create new  and unique opportunities.  You cannot just accept what happens to you in life, you have to call in your own internal lawyer and fight for your dream.

This week I leave you with a recipe for Pad Thai.

The reason I chose this recipe is because it is a dish that is popular when prisoners “cook” in their cells to recreate good food that they crave. They cook ramen noodles with hot water, peanut butter and hot sauce to make a facsimile of Pad Thai.  This revolting culinary item is in line with “the spread ” and “correctional cake. ”

It’s all about improvisation and, of course, there is nothing like the original recipe, but hey, you do what you have to do when you’re behind bars.

Until next week,  keep your noses clean. Start with soaking the dry noodles in lukewarm or room temperature water while preparing the other ingredients. Getting the noodles just right is the trickiest part of making Pad Thai. Make sure that the noodles are submerged in plenty of water. Check out Tips and Substitutions for in depth explanations. By the time you are ready to put ingredients in the pan, the noodles should be flexible but not mushy.

Julienne tofu and cut into 1 inch long matchsticks. When cut, the super firm tofu/pressed tofu should have a mozzarella cheese consistency. You can fry the tofu separately until golden brown and hard, or you can fry with other ingredients below.

Cut the Chinese chives into 1 inch long pieces. Set aside a few fresh chives for a garnish. Rinse the bean sprouts and save half for serving fresh. Mince shallot and garlic together.

Use a wok. If you do not have a wok, any big pot will do. Heat it up on high heat and pour oil in the wok. Fry the peanuts until toasted and remove them from the wok. The peanuts can be toasted in the pan without oil as well. Add shallot, preserved turnip, garlic and tofu and stir them until they start to brown. The noodles should be flexible but not expanded at this point.

Drain the noodles and add to the wok. Stir quickly to keep things from sticking. Add tamarind, sugar, fish sauce and chili pepper. Stir. The heat should remain high. If your wok is not hot enough, you will see a lot of juice in the wok at this point. Turn up the heat, if it is the case.

Make room for the egg by pushing all noodles to the side of the wok. Crack the egg onto the wok and scramble it until it is almost all cooked. Fold the egg into the noodles. The noodles should soft and chewy. Pull a strand out and taste. If the noodles are too hard (not cooked), add a little bit of water.

When you get the right taste, add shrimp and stir. Sprinkle white pepper around. Add bean sprouts and chives. Stir a few more times. The noodles should be soft, dry and very tangled.

Pour onto the serving plate and sprinkle with ground pepper and peanuts. Serve hot with the banana flower slice, a wedge of lime on the side, raw Chinese chivesand raw bean sprouts on top.

As always, in Thailand, condiments such as sugar, chili pepper, vinegar and fish sauce are available at your table for your personal taste. Some people add morechili pepper or sugar at the table.