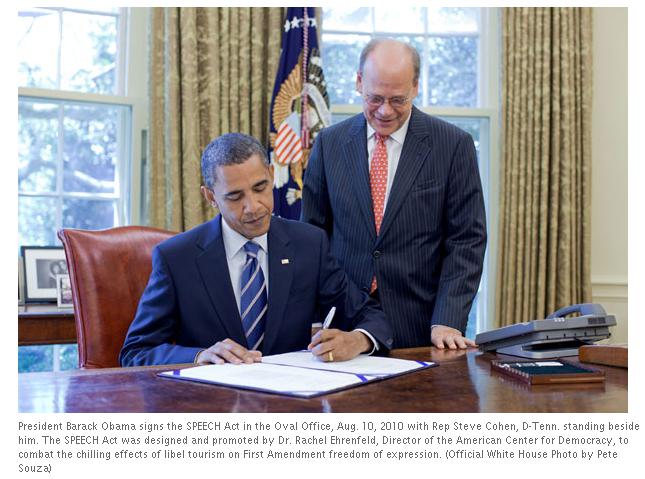 In August of 2003, a small publishing firm published Funding Evil: How Terrorism is Financed and How to Stop It by Dr. Rachel Ehrenfeld. The book catapulted into international legal controversy when Saudi billionaire and businessman, Khalid bin Mahfouz, sued Dr. Ehrenfeld for libel in London for naming him in the book as a terrorist financier.

Her book was not published in the United Kingdom, but the lawsuit was allowed because twenty-three copies were purchased online in England. Ehrenfeld refused to acknowledge the jurisdiction of the British Courts and was ordered to pay $225,000 in damages, and continued distribution of the book from the U.S. was prohibited.

Dr. Ehrenfeld counter-sued Mahfouz in New York and became the force behind Rachel’s Law and The Speech Act.

The SPEECH (Securing the Protection of our Enduring and Established Constitutional Heritage) Act upholds First Amendment protections for American free expression by guarding American authors and publishers against the enforcement of frivolous foreign libel suits filed in countries that do not have our strong free speech protections. Such lawsuits are often used by “libel-tourists” to suppress the rights of American scholars, writers, and journalists to speak, write and publish freely in print and on the Internet.

The Act grants “a cause of action for declaratory judgment relief against a party who has brought a successful foreign defamation action whose judgment undermines the first amendment” and provides for legal fees. These measures will help diminish the severe chilling effect such suits have already had on journalists, researchers the general media, particularly on matters of national security and public safety. –Ruth King

When I hear about the dreams of other people, they are often about the hope of foreign travel, gains in fortune, falling in love, or making it big in one’s profession. It is rare to hear a dreamer exclaim, “I will end poverty” or “I have an idea for ending violence in the world.”

I recently spoke with Dr. Rachel Ehrenfeld about her dream to stop terrorism by eradicating the funding that supports it; what happened to her because of writing the book, Funding Evil: How Terrorism is Financed and How to Stop It; and how she became an authority on the movement of terrorist funds through international banking and governments.

The Force Behind The Speech Act

What made you decide to write Funding Evil?

I’ve been following terrorism for a long time, and whenever I see terrorist group activities, I always wonder who paid for it. I (always) wanted to know where the money is coming from because if you know who is funding it, you know more about the agenda of the terrorist — never mind what they say.

I was also interested in finding out when terrorism, especially Islamic terrorism, had grown so much and how they were funding themselves.

I think that the more we know about who funds terrorism and how it is being done, the sooner we can take steps to stop the funding.

And if you stop the funding — you know, if people don’t have money, they cannot do very much. To recruit the terrorist to commit the attack (on the World Trade Center), somebody had to fund a huge infrastructure — to recruit such people, to indoctrinate them, to pay for the training, weapons, travel, their false identities, a huge support system and that costs many billions of dollars.

And this is what the Saudis’ have been doing. So it’s very important to find out who actually funds radical Islamic terrorists, and that’s what I set out to do.

Do you feel Khalid bin Mahfouz specifically targeted you?

I was not the only target. When Mahfouz threatened to sue me, I was number 29 on his list. He previously successfully silenced 28 major publications in the US and elsewhere — writers and publishers of the biggest newspapers.

He was threatened with a libel lawsuit in England, and since he was a Saudi billionaire, who was the Saudi oil family’s banker with his foundation that funded al-Qaida and represented the families of al-Qaida; and he threatened to sue for libel in England because English libel laws are pro-plaintiff; no one wanted to go to court (apparently) to fight with a Saudi billionaire who has endless sources of money, then lose because of the English libel laws.

People (Americans) just decided they would not fight to protect our rights to publish who in Saudi Arabia is funding terrorism. But when he sued me, I realized from being number 29 that he was doing this as a weapon to silence the western media from exposing what he and the Saudis were doing.

Since the book was only published in the US and a very small publisher published it — and not published in the UK — the fact that he chose me (as far as I understand) not just because the book was very good at exposing what he did but also (I think) because I was an Israeli-American, it was an incentive. I never spoke with him so that I couldn’t find out. He actually died just last year – in July just before Congress passed the Speech Act. . . Which I thought was kind of nice.

Mahfouz was a very important man in Saudi Arabia. When he died, the newspaper obituaries wrote that one of his biggest achievements was his successful libel lawsuits against the “Zionist neo-conservative Israeli-Americans.” I thought that was wonderful since his lawsuits lead to Rachel’s Law and then the Speech Act.

What is the historical importance of Rachel’s Law and the Speech Act?

Because of the Speech Act (in America), the British Parliament is now considering two (I think two – I know of at least one) bills before Parliament to change the libel laws in England.

When Rachel’s Law was passed in New York, it started a movement to demand reform in British Libel laws which are draconian — in place since 1849. Those who wanted change in England were encouraged by Rachel’s Law to demand libel law reform in England.

Rachel’s Law is important because it limits the enforcement of foreign libel judgments on all American writers and publishers — including the Internet. I think this is VERY important.

I did it because I realized that we (in America) actually didn’t have protection from such lawsuits from foreign libel lawsuits. We are not protected under the First Amendment in the Bill of Rights.

How did you get both American political parties to pass The Speech Act?

I’m for free speech and America’s security. I want to preserve democracy, the constitution, and free speech the way that it was originally intended. Any foreign laws should not threaten us, and this is how I approached Congress for protection from such threats.

It is not really against the Saudis or British law — the law says, “No foreign country – no foreign libel judgments from any country in the world.” Other countries have lesser protections on free speech than we do.

I am glad that Congress did the right thing.

Throughout the process, were you ever in fear for your life?

I was not in fear, but I was threatened by people who worked for the Saudis.

Where did you find the strength to stand up against Mahfouz, take on the libel laws, and see it through?

HA! It was a God-given gift – I don’t know. I actually found it interesting by the time he (Mahfouz) died, he had a website where he listed all the victories that he had, all the apologies from different publishers — the best-known publishers in the United States (and elsewhere).

He posted the apologies and the retractions on his website because he wanted to intimidate others from writing about him and his countrymen.

Americans take (free speech) for granted. I was raised in a different country and traveled the world to appreciate how important it is.

Americans do not — and that is very dangerous because Americans should know that free speech is very rare. If someone is not aware of how important their rights are, those rights can be taken away from them.

Looking at what is happening in the Middle East, people don’t get that although they talk about democracy, democracy, however the radical Muslim groups, and you can hear the voices now that are talking about democracy by Islamic law, which is an oxymoron.

It’s like having a communist democracy. But unfortunately, most Americans are ignorant to the facts — they believe what they see (or hear) on CNN, and often, things are being taken out of context.

The real information explaining what the radical Muslims are asking and what it means to have democracy according to Islam is not being reported. We do not hear any explanations about it.

Do you have any advice for women who face challenges they don’t believe they can overcome?

Well, if they do not believe they can overcome them, then I cannot help them, you know? But I can say that facing challenges — challenges are there for us to stand up to — to conquer them. People should not panic. When something happens, I try always to sit back a little bit and not react immediately. I do not think, “Oh no, this is the end of the world, and that’s it!”

When I received the letter threatening to sue me from the Saudi, I already knew what he was doing, so my reaction was, “How wonderful! I haven’t written about him enough in the book, and this will give me the opportunity to expose him further, so I called up my lawyer and said, “How can we counter sue him to expose further who he is?”

Women should keep their cool a little bit and think more constructively.

How can we change the situation? How can we respond? We should not accept threats but try to find out how to stand up to the challenge.

We should appreciate our independence and try to preserve it!

Dr. Rachel Ehrenfeld is the Director of the American Center for Democracy and the Institute for Economic Warfare. She is the author of Funding Evil, How Terrorism is Financed — and How to Stop It, Evil Money — Encounters Along the Money Trail, and Narco-Terrorism.

Dr. Ehrenfeld is an authority on the movement of funds through international banking and governments to support terrorism, economic warfare, narco-terrorism, and political corruption have consulted different U.S. government agencies and foreign governments.

She has been a visiting scholar at the Columbia University Institute of War and Peace Studies, a research scholar at New York University’s School of Law, and a fellow at Johns Hopkins School of Advanced International Studies (SAIS) Fletcher School of Law and Diplomacy, and Jesus College at Cambridge University. Dr. Ehrenfeld’s Ph.D. in Criminology is from the Hebrew University School of Law in Jerusalem.

I want to thank Dr. Ehrenfeld for taking the time to speak with me about her journey and her push to get the SPEECH Act ratified in all 50 states. She is a powerful woman with a kind spirit who reminded me that I already have a great dream, and that dream was to be lucky enough to be born in a country such as America. Thank you.

« Life Lessons From Lauren Bacall
Choose Your Own Adventure Dream »