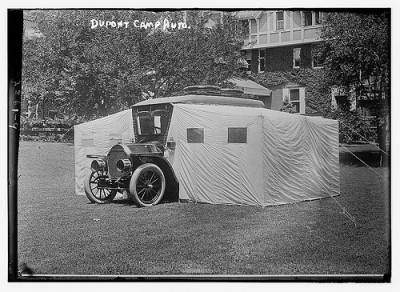 Have you ever noticed that when it comes to buying stuff, it’s almost never about the money? I notice that a lot since I think about money a lot. Here are two recent examples.

The other day, Virgo Man called me from work, something he hardly ever does. This time, he called me because he wanted to buy something. That makes the phone call all the rarer; my husband “Virgo Man” is a Virgo, after all.

Probably a double or triple Virgo. For those of you who don’t go in for astrology symbolism, that means he is thrifty. Cheap, actually.

Anyway, it turns out there’s an RV listed on Craigs List for the low, low price of $750. Reportedly owned by someone’s grandpa who took it camping once, then left it sitting in the yard for thirty-some-odd years until he died.

And now it’s up for sale.

Stop the presses! Virgo Man takes the afternoon off work, I scamper to the bank and withdraw the cash, and we get on the road and head across the valley, hot on the trail of a really really affordable (cheap) RV.

Well, the deal fell through. My theory is the guy was one zero short when he typed up his ad for Craigs List, and after I called him to arrange a place to meet, he realized his error and turned off his phone. A no-show. We did not buy the RV.

There are two points to this story.

1. We were not looking for an RV. We have said to one another a few times that having an RV would be nice because we could go out to the beach for a weekend on a whim and not have to worry about the weather, or about packing the vast array of necessary camping accouterments. If you live in Northern California, you know that going to the beach is pretty much hit or miss, weather-wise.

The planning it takes to go tent camping at the beach is not really worth the risk that the weather will turn on you. But we love camping at the beach (when it’s nice), and if we could do it without all the planning, and without risking being soaked by dense fog or blown to the far side of Oz by “breezy” conditions, we’d do it a lot more. An RV would be great for that. Still, we weren’t looking for one, until we saw one for $750 on Craigs List.

2. Neither Virgo Man nor I believe we have $750 lying around, just waiting to be spent on an RV. Rather, we have needs for $750, which we don’t take care of because “we can’t afford it.” For just one thing, we have a juniper hedge around our house that would put the Hundred Year Forest to shame. And we have a quote from a landscaping company–$800 to rip it out. But we don’t have $800, or anything like $800, to spend on something like that. Funny how we apparently had $750 to spend on an RV though, isn’t it?

Clearly, being prepared to quite suddenly spending $750 we don’t really believe we have on an RV we weren’t looking to buy was not about the money. We didn’t even talk about the money, except for the part where I shouted into the phone, “I’ll go to the bank and get the cash; you meet me out front.”

What we talked about were the beach and freedom, and being warm and comfortable and still away from home. It was about spontaneous vacations, minimizing the work, and maximizing the fun. It was about being able to lend the RV to our friends, who would love to have one a couple of times a year but don’t have a place to keep one full-time.

It was about that not-so-distant time when the kids have left home, and we could rent our home out to tourists and live in the RV while we were raking in the dough. Those were the things we talked about – not whether we had the money.

Example #2. The case of the mistaken underpayment

Earlier this week, I received notice from our lender that our most recent mortgage check was written for an amount less than the payment amount. Furthermore, according to the notice, our payment would not be posted until the shortfall was made up, and if we did not remit payment immediately, we would be at risk of default on our loan, and foreclosure proceedings could ensue.

You’re thinking it’s a good thing the RV deal fell through, aren’t you? If we can’t even make a full mortgage payment, what are we doing buying an RV? But hold on Sparky! Because the shortfall was a bit less than $750. Just guess how much it was. Really, take a guess. I’ll wait. Okay, are you ready?

It seems so stupid. Why don’t I just add the 18 cents to the next payment, which is due in two short weeks? But no. If I don’t pay, they are threatening me with foreclosure. And even if they don’t foreclose, they’ll charge me almost $200 in late payment fees.

It must be a computer gone wild, don’t you think? No human being would go to such lengths over 18 cents, right? Right?

But in the end, it wasn’t worth the risk to blow it off. If there were a human being who cares that much about 18 cents, said human being most likely works for a gigantic faceless institutional bank, and would get a kick out of putting my home up for auction for over 18 cents. So, okay, I wrote a check for 18 cents.

This took some thought. Have you ever written a check for less than $1? They’re not really designed for amounts smaller than $1. I thought briefly about mailing cash, as in 1 dime, 1 nickel, and 3 pennies–or maybe two dimes, with a note to apply the extra two cents to principle. But someone could steal cash, and then we would lose our house. Thus I took the safe route and mailed a check, although I confess I used plain old first class mail (45 cents) rather than express mail ($20 or so).

I wonder how much it will cost to process that check and transfer the money over the federal funds’ wire from my credit union to the mortgage lender? Probably more than 18 cents.

But of course, I don’t believe this incident was about the money, either. I can’t say for sure what it was about, but I don’t think it was about 18 cents. Maybe it was about power, greed, and inhumanity. Or about respect for rules and rigid adherence thereto. Maybe there’s a sweeter possibility that I can’t think of right now.