You Are Here Home » WRITE WITH US » 1 Million Dollars: What It Gets You 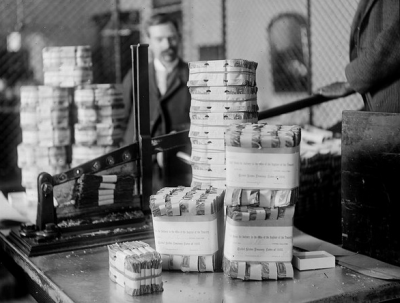 Here’s a list of some of the page one results, with a little commentary from me –

Apparently a lot of people want to just see the volume of currency involved in $1 million. That’s the imagination at work. It’s a fairly well-established concept that the imagination thinks in pictures. So if you want to imagine what it would feel like to be a millionaire, you can get an inkling by looking at pictures of piles and piles of money.

You know what went through my mind when I looked at some of those images? GERMS. That’s right, germs. Bacteria. Itty bitty icky bugs.

Money, especially paper money, is just about the filthiest thing you ever allow yourself to touch. Have you ever seen a person stick a dollar bill in their mouth to “hold” it while rolling down a car window, putting away a wallet, or just generally not having enough hands to accomplish all immediate tasks? YUCK.

To me, this is the great boon of the debit card. I hardly ever have to handle actual money, because I have a debit card. It’s clean and has only my particular bugs that I’m used to on it. You saw that Bank of America is going to start charging people $5/month for their debit cards? Possibly that is a small price to pay for avoiding the portable plague that is the paper dollar.

Here’s a guy who intends to earn $1 million by selling 1 million pixels of internet for $1 each. He says he’s just trying to pay for college and trying to avoid debt. Well, me too. Why should I give him my $1?

This reminds me of other kinds of money-generating gimmicks, like the one in Scotland where you can get a landed title (Lord so and so, or Lady thus and such) by purchasing a square inch of the land upon which the title is settled.

Or that one where you can buy and name a star in the immensity of the firmament as a tribute to your true love.

Or how about the one where you pay a bunch of money to have your deceased body cryogenically preserved against the day when scientists learn how to restore life and make it everlasting?

This makes me think of the sometimes minuscule relationship between value and expenditure. Say I bought a star for $25. Really, what did I get that I didn’t already have? I could have just picked out a star, given it a name, and stuck it in a gift card. And why is there no competition among star brokers? Why do we not have choices as to price, features, benefits, and add-ons?

Or, say I paid a quarter of a million or so to be cryogenically preserved. What if there’s a storm and power lines are downed? What if all the fossil fuels are depleted and the generator backup won’t run? What if it’s 100 years before science catches up with my frozen preserves, and now the vault is under the control of the inventor’s slacker great granddaughter who is disorganized and can’t get her act together to have me thawed?

To get back to the original point, as far as I’m concerned I already own plenty of internet pixels. What do I need to pay a guy $1 for?

According to How Stuff Works, inflation means we have a lot more millionaires than we used to. For the same reason, being a millionaire isn’t what it used to be. So although those piles of money look like a lot, when you get around to spending the piles of money, or investing them in the stock market, or putting them in your passbook savings account yielding somewhere around 0%, they don’t really have a value commensurate with their appearance.

Dollars are getting to be a little like empty calories. You may have what seems like a lot of them, and they take up space and look impressive, but they don’t really contribute to the overall flow of energy. Not like they used to.

I saved the best for last. For some of us, thinking about being millionaires is not really about how to earn it, it’s about how to get it – dream it up, win it, stumble across it, or inherit it. I think that’s because $1 million seems so mythic (even though it’s really not, any more).

If you are in that category, and you can objectively prove the existence of a paranormal event, then the James Randi Educational Foundation will award you $1 million.

I don’t know about you guys, but I have plenty of paranormal experience. There was last week with the coming and going of all the money, just for example. But seriously, O Psychic One reads my mind. Virgo Man, who not for nothing is named Virgo Man because he is SUCH A VIRGO and refuses to believe anything that he cannot see or physically touch, says he saw a ghost in Ireland once. I myself conjured a deer out of nowhere by telling a story about a friend who had a deer crash through her windshield, whereupon a deer obligingly materialized and crashed through MY windshield. Truth.

Unfortunately, I have no objective, quantifiable proof of any of that. And that’s the rub. No proof, no million dollars.

I guess I’ll have to do it the hard way, by buying lottery tickets.

Is anyone out there doing internet searches for 1 million dollars? If you are, leave us a comment below and share what you learned!

« Million Dollar Dreams: Can It Be Done In 2 Hours A Day?
Thousands Struggle With Their Inner Genius – But Never Discover It »